The pandemic has resulted in the world slipping into a global recession and mass unemployment – and Malaysia is no exception. Malaysia’s unemployment rate is currently the highest it has been in thirty years. YouGov surveys full-time workers in the nation, to find out how they are coping with job insecurity, and their attitudes towards unemployment.

Job insecurity refers to the fear of losing one’s job. A quarter (25%) of Malaysian employees feel insecure in their jobs, up 5 per cent compared to a pre-COVID era. One in twenty (6%) feel ‘very insecure’ and two in ten (19%) feel ‘somewhat insecure’. Two in ten (18%) feel neither secure nor insecure and almost three in ten (57%) feel secure in their jobs. Middle-income earners (monthly household income between RM 4,000 to RM7,999) are the most likely to feel secure in their jobs, whereas low-income earners (monthly household of less than RM 4,000 a month) are the least likely to say the same (64% vs. 53%). 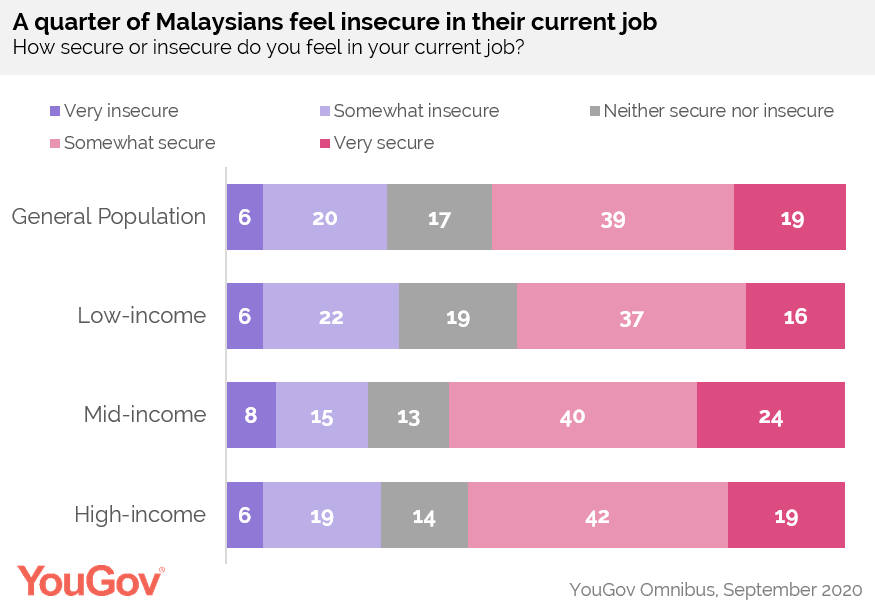 The majority (92%) of employed Malaysians are experiencing some level of stress over losing their jobs – only a small percentage (8%) feel ‘not at all stressed’. Two in ten (23%) feel a little stressed, less than half (47%) feel somewhat stressed, and about a quarter (23%) feel very stressed. Unsurprisingly, those who are feeling ‘very insecure’ in their jobs are the most likely to feel very stressed – with over two in five (44%) saying so, as opposed to those who feel ‘very secure’ (14%).

In the event of losing their jobs tomorrow, seven in ten (71%) believe it will be difficult to find another one of similar pay and benefits – two in five (40%) think it’ll be ‘somewhat difficult’ and the other three in ten (31%) think it’ll be ‘very difficult’. About two in ten (18%) are indifferent, and the remaining 7% would find it easy. All income-groups appear to find it equally difficult to find another job. Three in ten (28%) believe they will be able to find a new job within three months should they find themselves unemployed tomorrow. Two in ten (18%) think this will be between three to six months and almost a quarter (23%) believe this will be between six months to a year. One in seven (15%) think it will take longer than a year to find another job, and the remaining one in seven (15%) are unsure.