Every year the Reuters Institute for the Study of Journalism publishes an international survey - conducted by YouGov - that examines the state of digital news across the globe.

Overall, four in ten (40%) are most worried about false or misleading information from politicians online. In May 2020, Twitter began labelling certain posts from President Donald Trump and other leaders as “potentially misleading” – a culmination of a debate about whether the platform should take action against his allegedly false statements that date back to his election in 2016.

Americans are more likely to be worried about online misinformation from these leaders than the average, as are those from Brazil and the Philippines: two other countries with populist “strongman” premiers. South Africans are also more likely to report concern about politicians. Over half of those surveyed (52%) say that when leaders say untrue things online, the news media should report it because it’s important to know what the politician said. Only three in ten (29%) said it should not be emphasised as it might give the leader unwarranted attention.

Beyond politicians, the global sample is most worried about misinformation from activists (14%), journalists (13%), and ordinary people (13%), with only one in ten (10%) most concerned about foreign governments spreading fake news. 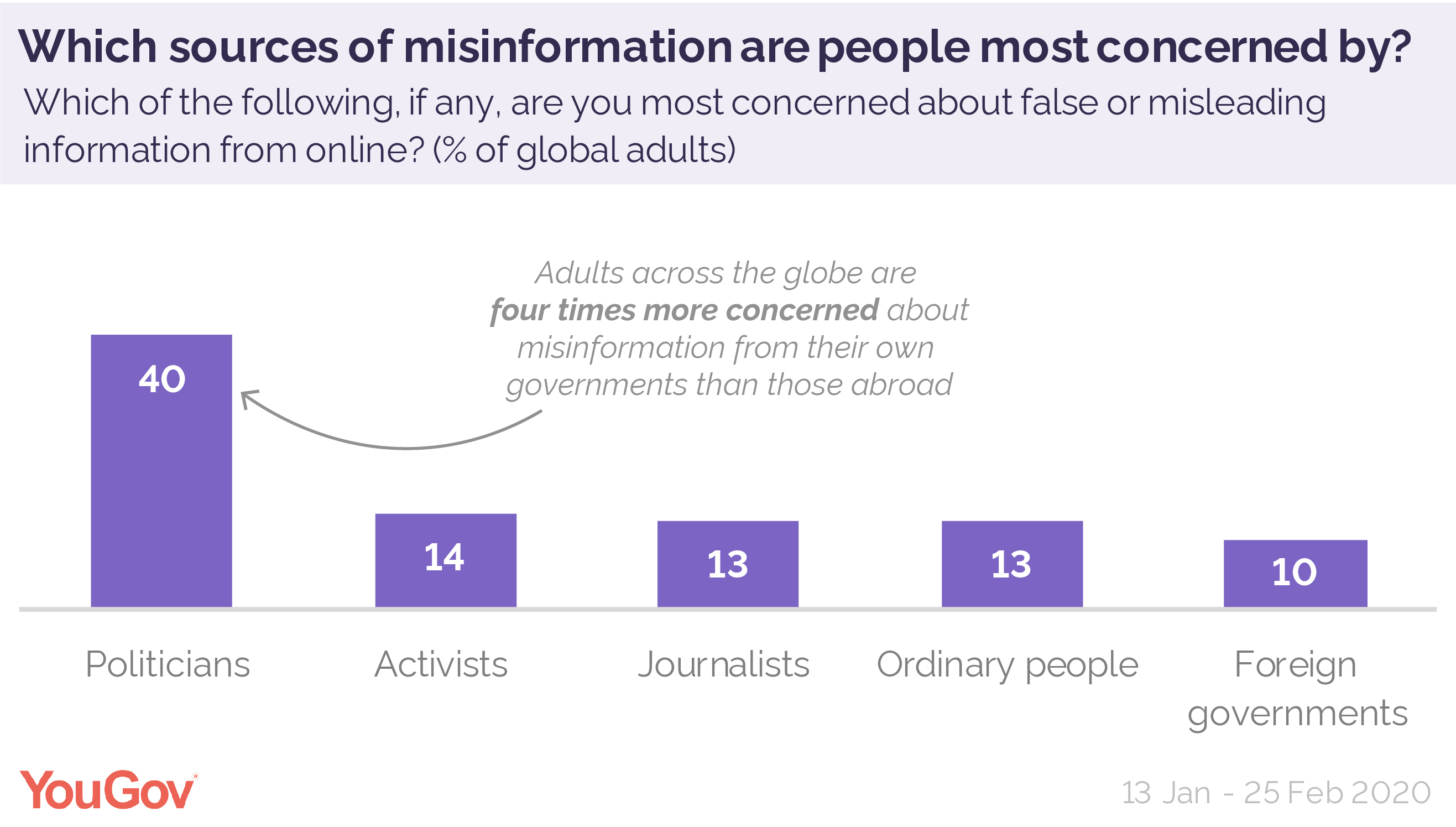 The report indicates that faith in the global media continues to decline. Less than four in ten (38%) claim to trust most news most of the time – a year-on-year fall of four percentage points – while less than half (46%) trust news they consume themselves. Three in ten (32%) distrust online searches most of the time, and a fifth (22%) distrust social media.

In Hong Kong, the contentious island’s relationship with mainland China has led to protests -and a 16 percentage point decline in media trust. Chile has seen a similar fall of 15 percentage points. Following a divisive year that involved a general election and further clashes over Brexit, trust in the UK media has declined by 12 points – hitting 28% overall. On the other end of the scale, Finland and Portugal (56% for both) enjoy the highest trust in their news.

As for how global consumers prefer their news, six in ten (60%) prefer it to have no point of view compared to 28% who prefer it to share their opinions. 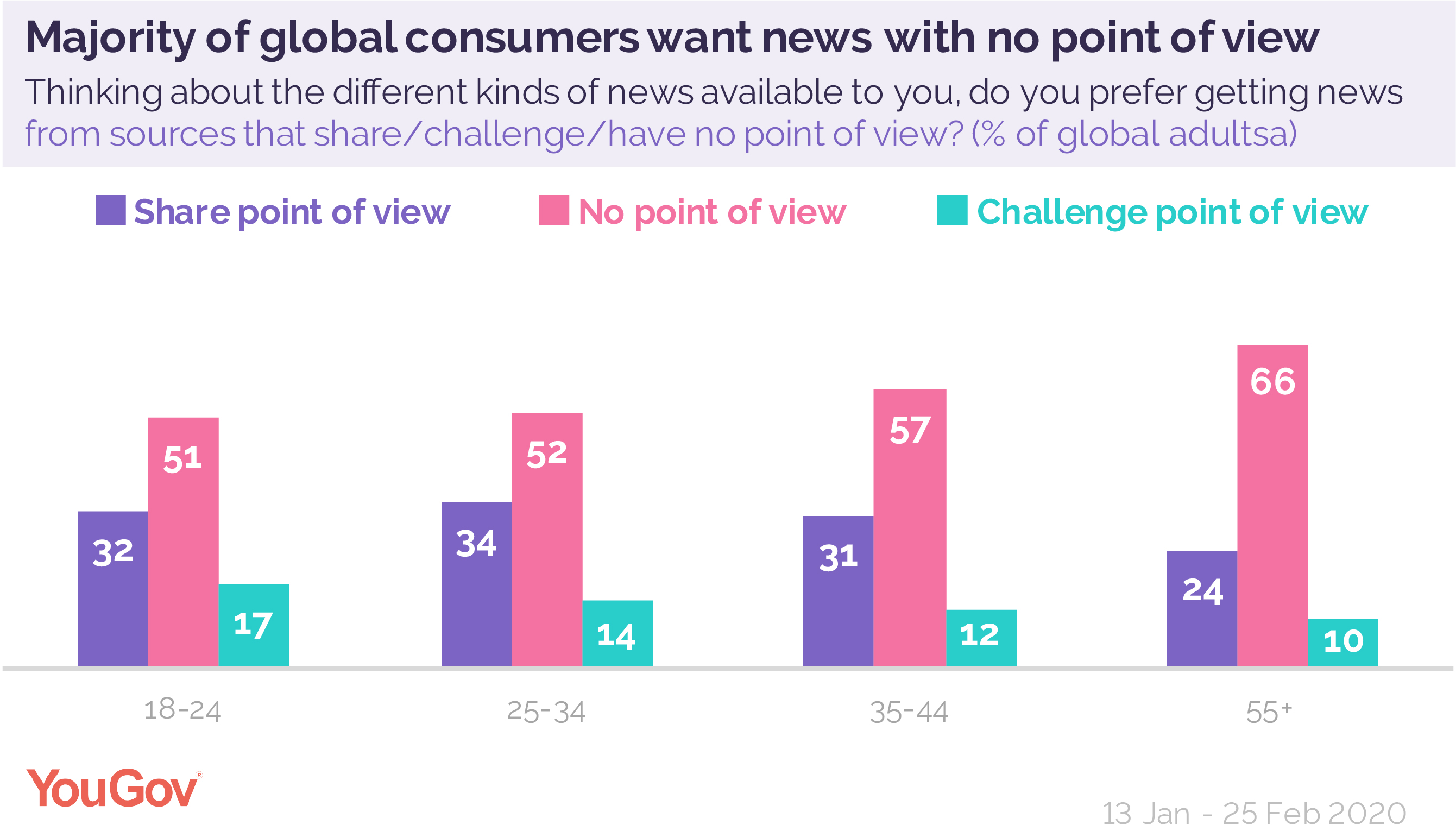 The data from January suggests that there have been significant increases in the percentage of consumers paying for online news in a number of markets. In the US, 20% pay for some sort of news publication on an ongoing basis, with The New York Times and The Washington Post enjoying a 39% and 31% share of this market respectively. In Norway, four in ten (42%) pay for online news, with almost two-thirds (64%) paying for local papers. 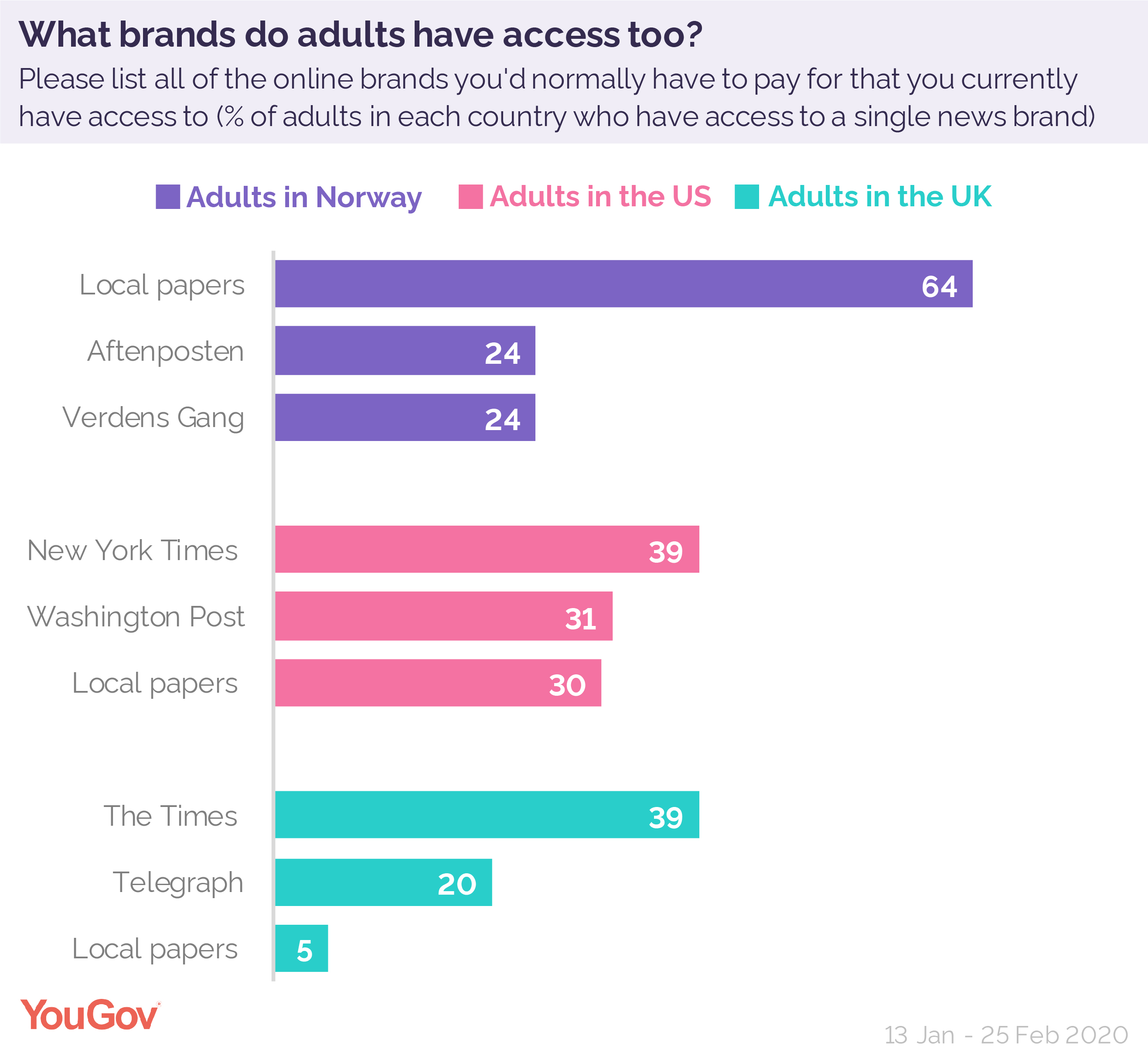 Of Norwegians, half (49%) say they’d miss local papers if they were to disappear, and a similar proportion of Germans (54%) feel the same. But regional news doesn’t enjoy the same support across the globe: in the UK, for example, The Times is clearly on top in the subscription market, with four in ten (39%) paying for its content, and The Telegraph (20%) comes in a distant second, while only 5% pay for local news. What’s more, only a quarter (25%) say they’d miss their regional papers if they were to disappear.

The impact of coronavirus

From the additional April study, which was restricted to six countries, we found that consumers were using a number of platforms and services to gather information about coronavirus.

A quarter of those surveyed said they used WhatsApp to learn about or share news about COVID-19 (24%), while a fifth (18%) joined a support or discussion group with people they didn’t know on either Facebook or WhatsApp with the express intention of talking about it. Half (51%) took part in these groups with people they did know: friends, family, and colleagues.