Although current political uncertainty has taken a hit on the economy, Malaysians appear evenly split on how the economy will change in the next twelve months. About a third (32%) think it will get better, over a third (37%) think it will get worse and slightly less than a third (31%) think it will remain the same. Those over the age of 45 are more likely to feel pessimistic about the future of the economy than those below the age of 45 (42% vs. 33%). Conversely, low-income earners (earning less than RM 3,999 a month) are more likely to be optimistic about how the economy will perform than high-income earners (earning more than RM 8,000) (42% vs. 22%).

Though there is no set date for an election, YouGov polled Malaysians asking who they would prefer to see form a government. We divided this into two alliances – the first consisting of PKR (People’s Justice Party), DAP (Democratic Action Party), Amanah (National Trust Party) and others. The second is comprised of UMNO (United Malays National Organisation), PAS (Malaysian Islamic Party), PPBM (Malaysian United Indigenous Party) and others. Looking it which alliance Malaysians prefer, it appears that this is almost evenly split between the first and second (43% vs. 42%). The remaining one in seven (15%) are undecided. 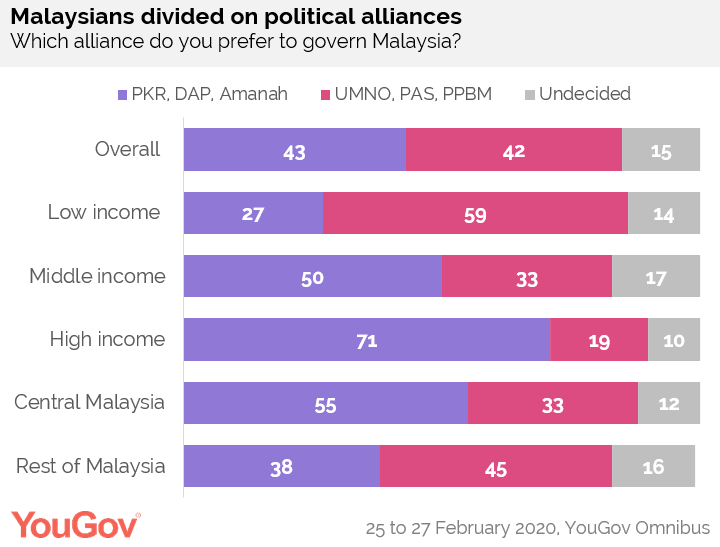 However, preference for political alliance differs depending on household income. Higher income Malaysians are much more likely to prefer the first alliance to form government than lower incomes (71% vs. 59%). Lower incomes on the other hand are much more likely to prefer the second alliance than higher incomes (59% vs. 19%). Location also plays a role in political preference. Those living in Central Malaysia (KL, Selangor, Negeri Sembilan and Putrajaya) are more likely to side with the first alliance (55% PKR etc. vs. 33% UMNO etc.) than those who live in other parts of Malaysia (38% vs. 45%).

YouGov Head of Public Affairs and Polling Asia-Pacific Dr. Campbell White says, “These profound differences between more affluent urban parts of Malaysia and less affluent rural parts demonstrate the challenges posed by the current political situation for a multi-ethnic, developing society like Malaysia. The next government faces a tough task in restoring confidence and stability in such a diverse country.”