Shopee has the strongest brand advocates amongst Malaysian consumers, second year in a row

The e-commerce platform heads the list with a score of 80.4 for the second year in a row. It is followed by Chinese electronics manufacturer Huawei in second (76.6) and instant messaging platform WhatsApp in third (74.6). 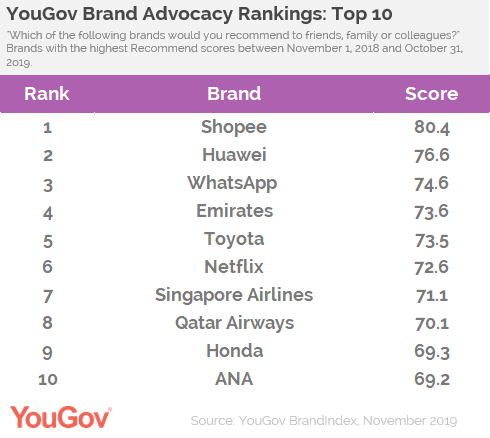 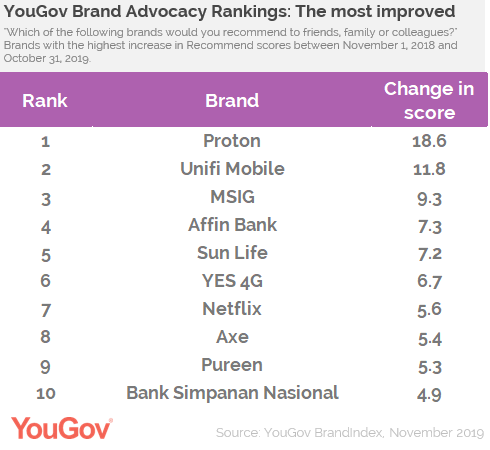 YouGov also shows which brands have the most improved levels of customer advocacy. Local automobile manufacturer Proton comes up on top (with a rise of +18.6 points). It is followed by internet service provider Unifi Mobile (up +11.8 points) and insurance group (which improved by +9.3 points).

Ervin Ha, Head of Data Products commented: “A brand recommendation is one of the strongest votes of confidence a consumer can give to a brand, and Shopee has managed to come up on top for two years in a row. Their viral marketing campaigns and constant shopping promotions have successfully won over customers and gotten their vote of confidence.”

YouGov BrandIndex screened all of its 419 brands for their net Recommend score, which asks respondents "Would you recommend the brand to a friend or colleague?" and “Would you tell a friend or colleague to avoid the brand?” Only respondents who are current or former customers of a given brand are interviewed. Rankings data was collected between November 1, 2018 and October 31, 2019, and Improvers data was collected between November 1, 2017 and October 31, 2019. All brands must have a minimum N of 200 and have been tracked for at least 6 months to be included in the rankings and at least 6 months in the prior year's period (as well as being currently tracked) to be included among improvers.