by
Kim Ho
in
Science & environment

New YouGov study of 30,000 people in 28 markets uncovers noticeable differences in attitudes between East and West

Climate change may never before have been as firmly fixed in the public consciousness as it is today. With campaigner Greta Thunberg set to speak at the UN’s Climate Action Summit, a new international YouGov survey uncovers attitudes to climate change across the world.

Acknowledgement of mankind’s role in the changing climate is widespread

That climate change is happening and that humanity is at least partly responsible is a view held by the majority across the world. Indians are the most likely to think that human activity is the main reason the climate is changing, at 71%.

At 35% Norwegians and Saudi Arabians are the least likely to think this, although a further 36% and 48% respectively in each market think that humanity is partially responsible for the changing climate. 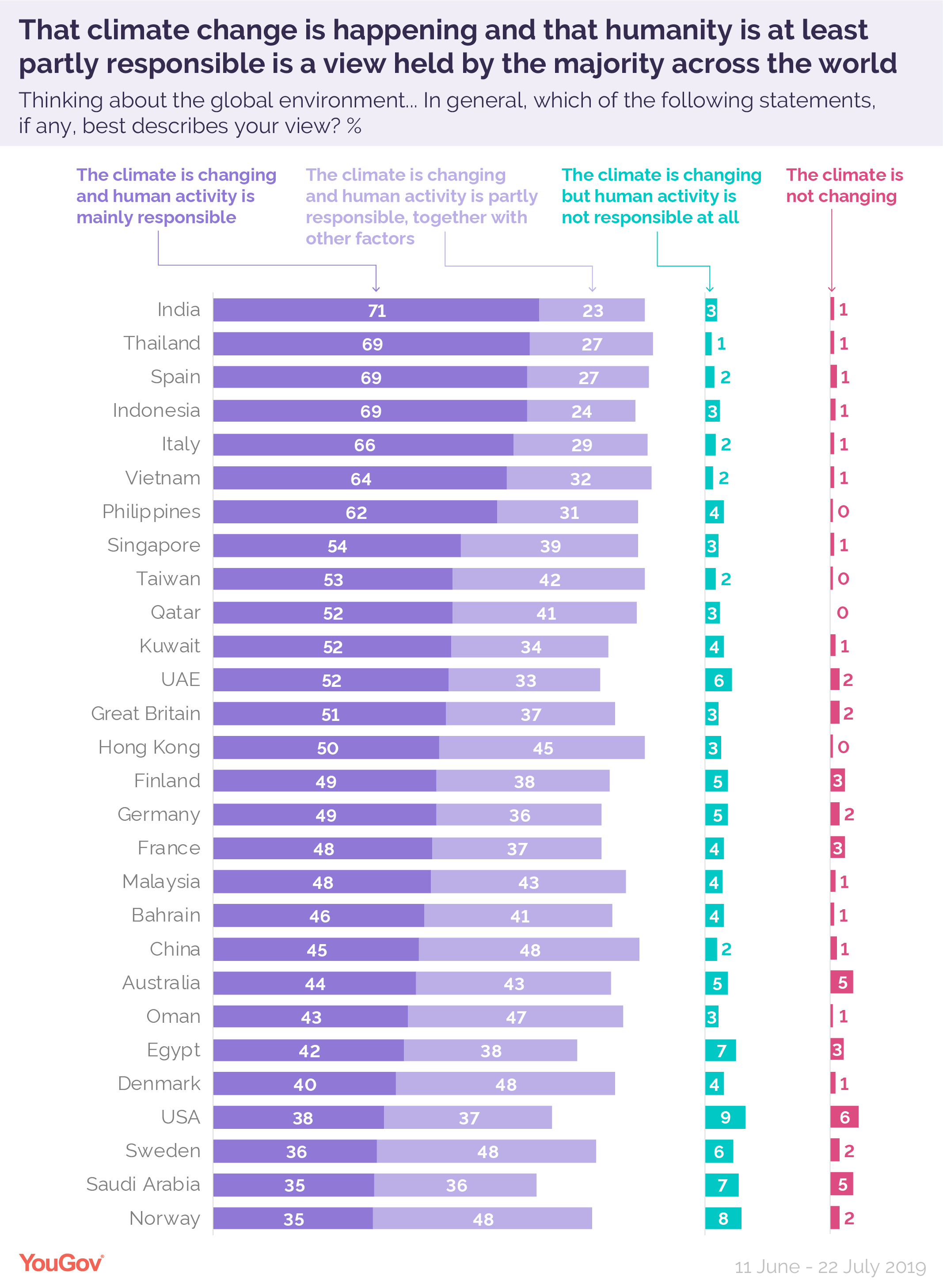 Depending on market, only between 0% and 6% of people believe that no climate change whatsoever is taking place, and likewise only between 1% and 9% in each nation say that climate change is happening, but that it has nothing to do with human activity. In both cases it is in the USA that these views are most likely to be held.

Climate change isn’t just seen as something that exists but happens to other people – across the world people tend to expect that climate change will have a large or moderate impact on their own lives. 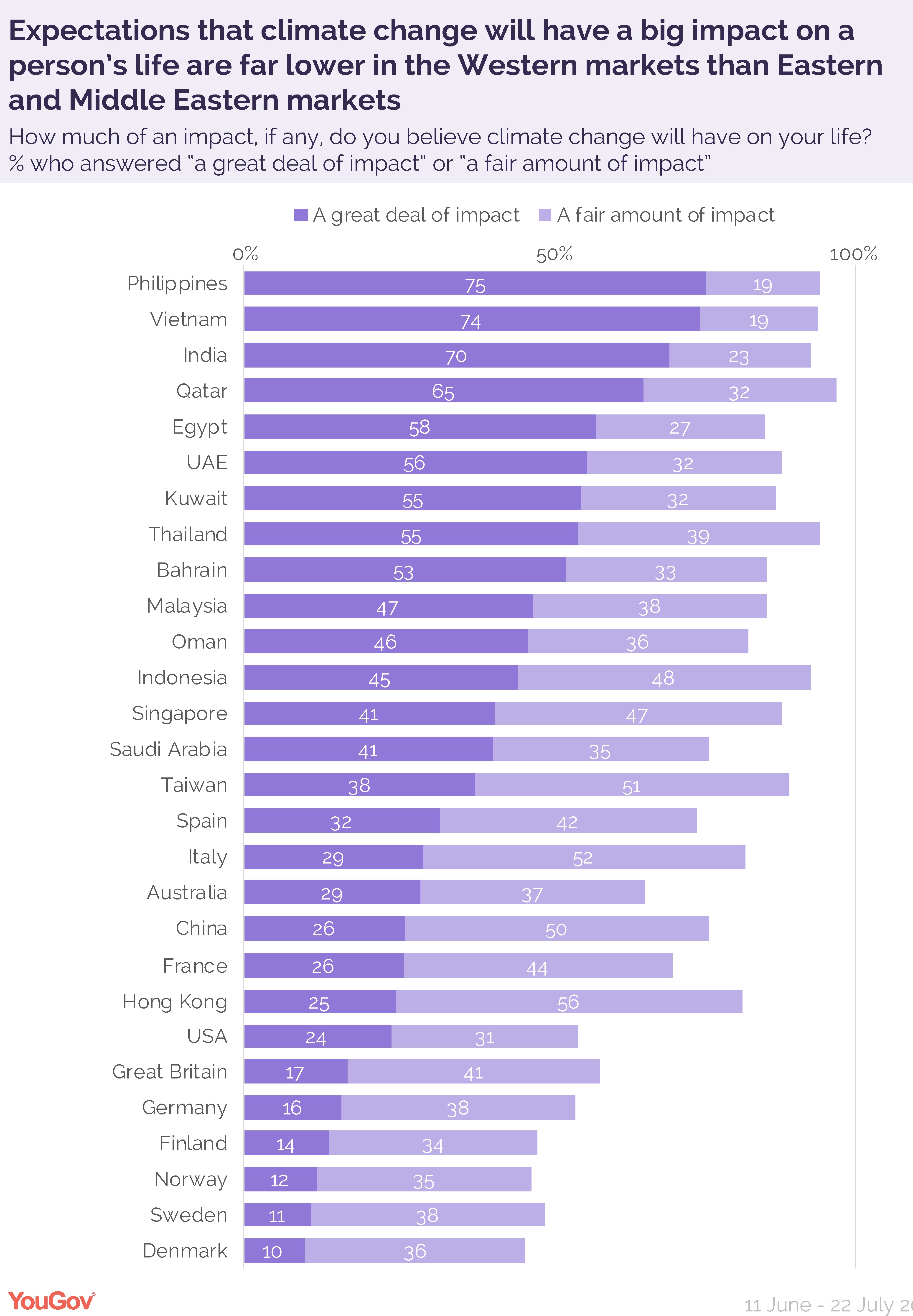 There is, however, a notable East/West divide. People in Eastern and Middle Eastern markets tend to be much more likely to think that climate change will have a great deal of impact than those in the West. For instance, while fully 75% of Filipinos and 65% of Qataris expect to have their lives disrupted in a large way (the highest rate in Asia and the Middle East respectively), in Europe the most worried nation is Spain, at only 32%. The Nordic nations come at the very bottom, with only between 10% and 14% thinking climate change is set to disturb their lives a great deal.

In fact, many believe some of the worst case scenarios are now likely…

We also put some of the worst case climate change scenarios to people and asked whether they thought they were likely or not.

Majorities in all markets believe that climate change will result in: serious damage to the global economy; cities being lost to rising sea levels; mass displacement of people from some parts of the world to others; and small wars. 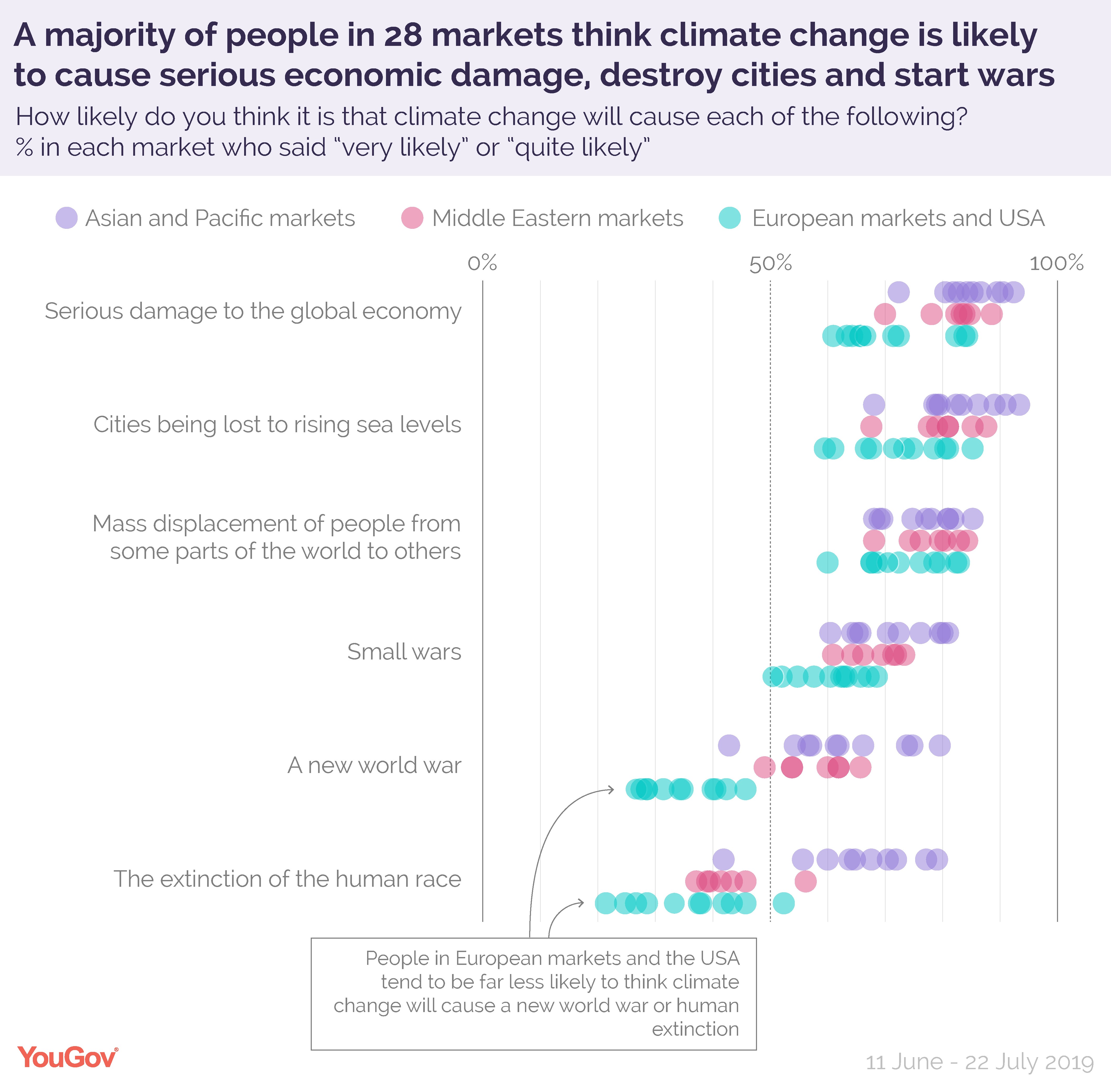 While these expectations certainly make for gloomy reading, the good news is that the public has faith that the worst effects of climate change can still be averted, but that dramatic action will be needed in order to do so. This is a majority belief in all markets, from a low of 50% in the US to a high of 82% in Spain. Finns and Swedes are the most likely to think that the worst effects can be avoided simply by staying the current course (21%), while Indians are most resigned to the belief that nothing can now be done to prevent the worst case scenario (22%). 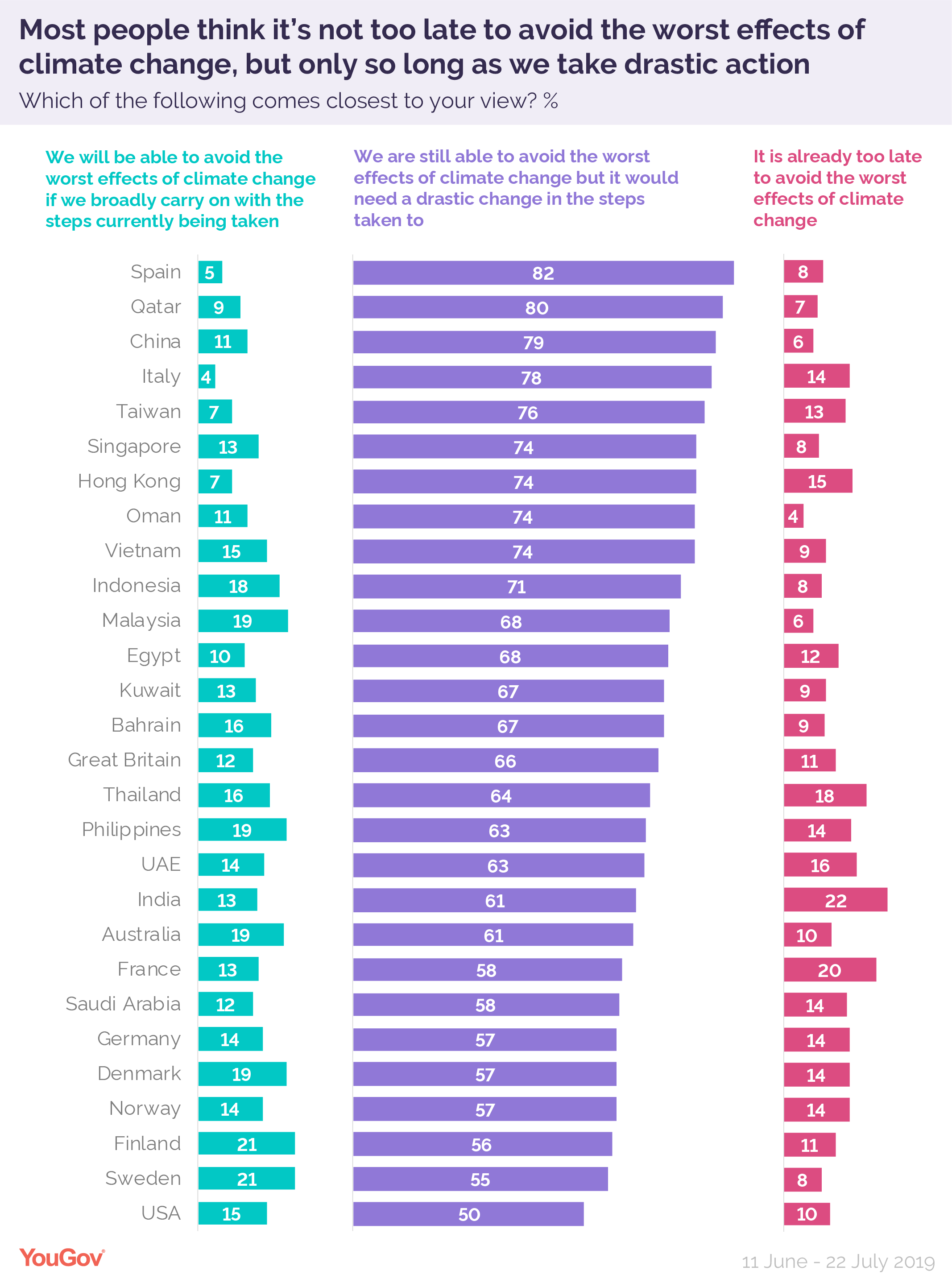 The “drastic change” people have in mind would seem to be reducing consumption. In 24 of the 28 markets surveyed, slowing the rate at which we consume resources is the preferred means by which we should combat climate change, as opposed to relying on technological innovation.

At the same time as thinking drastic action is necessary, people also admit that they and their nations have more to contribute to the fight against the changing climate than they currently do.

In 25 of the 28 market we asked, people were more likely to say that their market “could be doing more” to tackle climate change than they were to say they are “doing as much as it reasonably can”. 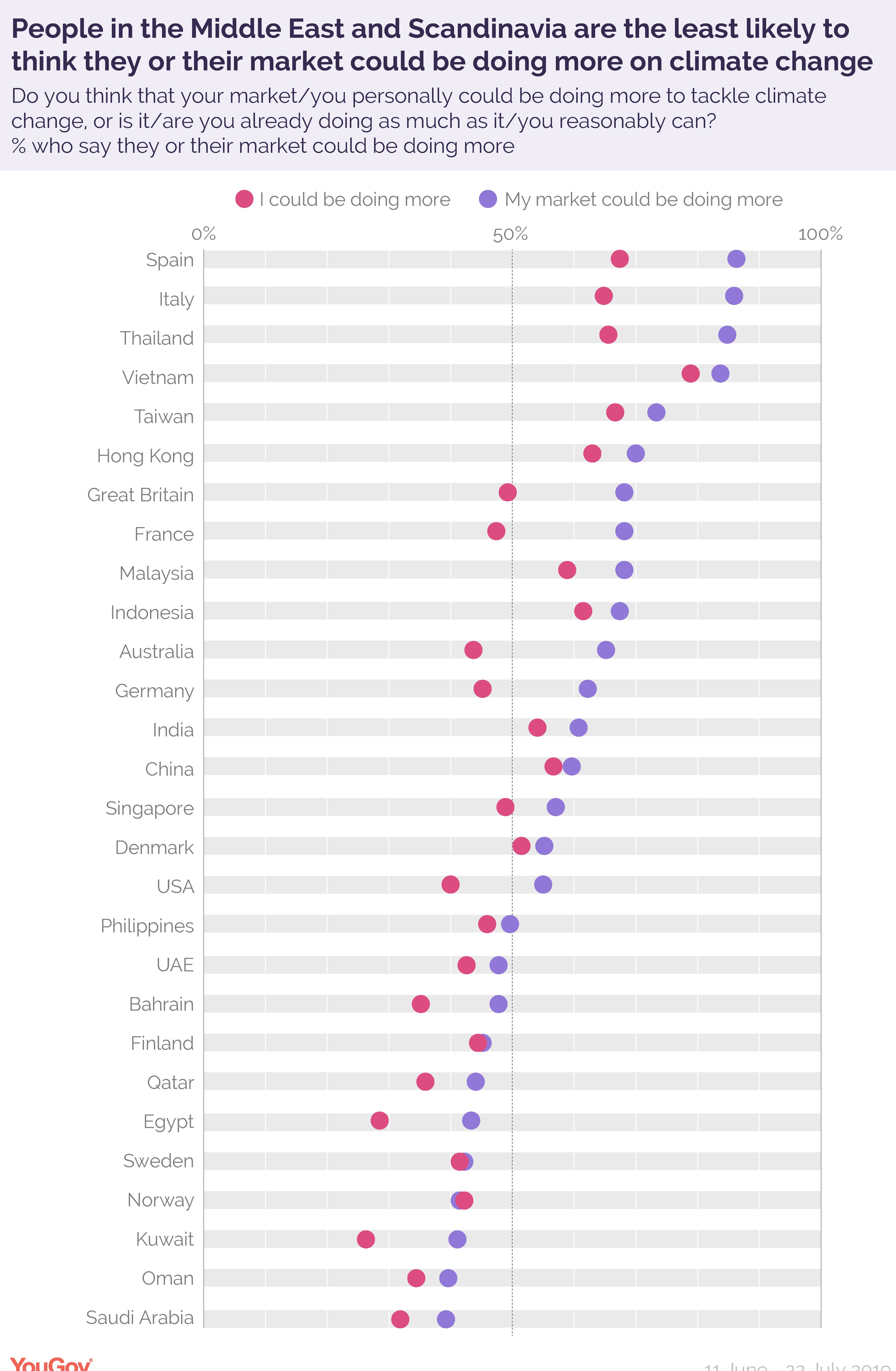 When it comes to whether the individuals themselves are doing as much as they can, people are more circumspect, although there is still a strong tendency to believe that they themselves can contribute more than they are currently doing so.

Middle Easterners are the exception, as well as Finns, Norwegians, Swedes and Australians, with the publics in almost all Middle Eastern markets being more likely than not to feel they are doing as much as can reasonably be expected.

Who’s responsible for where we are now?

Everyone takes their fair share of the blame for the current state of affairs the climate finds itself in. A majority in all markets believe international bodies, national governments of both wealthy and developing markets, businesses and industry, and individuals to all be “very” or “fairly” responsible for the current situation with climate change. 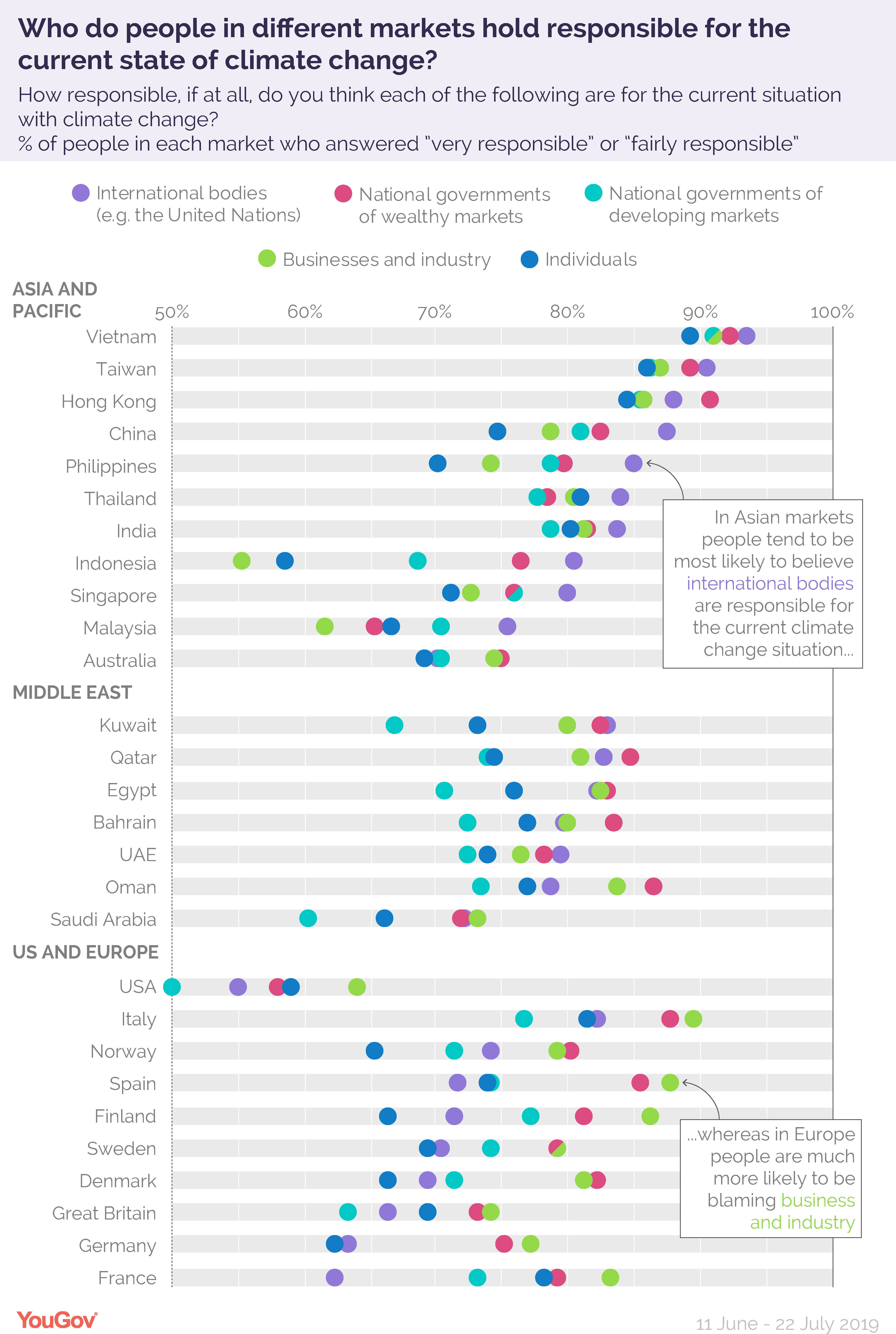 When asked which markets in particular they blame, the finger is pointed primarily at China and the United States, with India further away in third place.

And who has the power to fix it?