Examining the most positively talked about brand amongst those aged 18 to 34.

AirAsia is the most positively talked about brand amongst millennials, new data from YouGov BrandIndex reveals.

The Malaysian low-cost carrier tops the latest YouGov rankings, which considers the brand 18 to 34 year olds have discussed with friends in favourable terms. 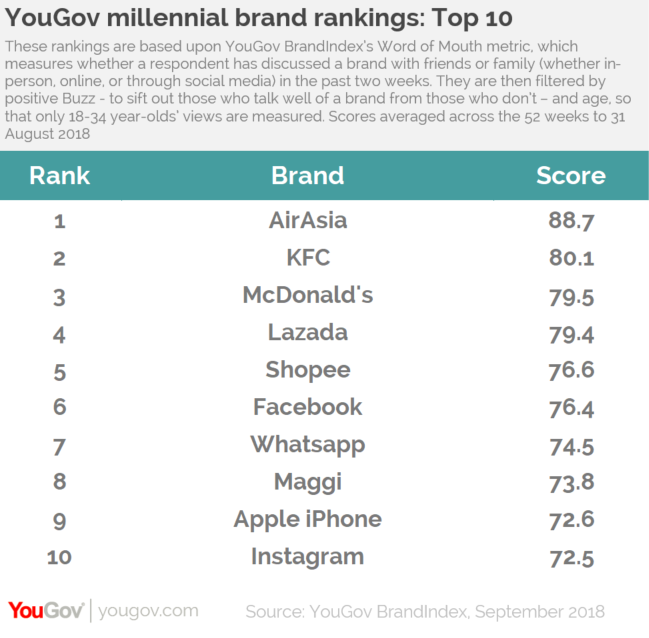 With CEO Tony Fernandes recently ranked as the fourth most admired person in Malaysia by YouGov, AirAsia leads with score of 88.7. It is followed by quick service restaurants KFC (80.1) and McDonald’s (79.5) in second and third place respectively. E-commerce platforms Lazada (79.4) and Shopee (76.6) also feature high up in the list, in fourth and fifth place.

Social media platforms also have a strong presence in the top ten. Facebook is in sixth place (76.4), with WhatsApp in seventh (74.5), and Instagram (72.5) in tenth.

The top ten is rounded out by packaged foods company Maggi (73.8) in eight place and Apple iPhone (72.6) in ninth.

Ervin Ha, YouGov’s Head of Data Products commented: “When it comes to popular brands, young Malaysians appear to have adopted AirAsia as their favourite carrier. From its charismatic CEO, to its annual ‘Free Seat’ marketing campaign, AirAsia has truly gained the power of word of mouth recommendations.” 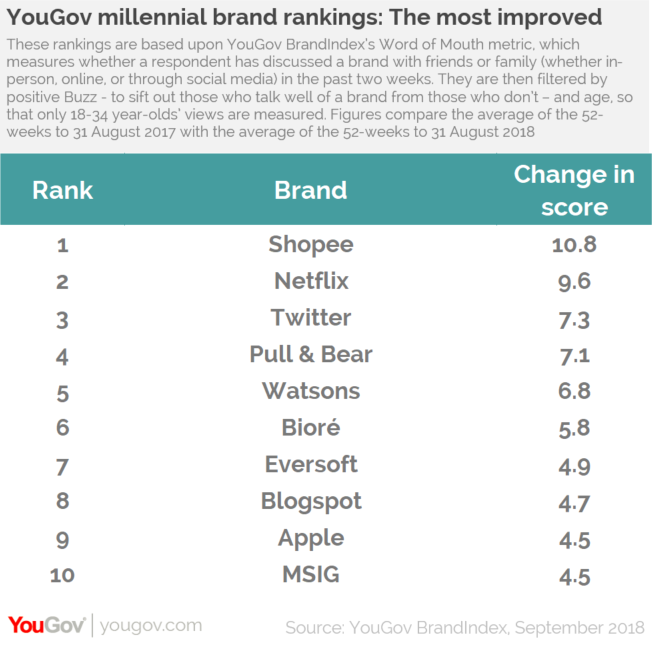 The rankings also show which brands have experienced the greatest uplift in the positive word of mouth over the past 12 months. Shopee, tops the improvers list with its score increasing by +10.8. It appears ahead of Netflix (+9.6), Twitter (+7.3) and Pull & Bear (+7.1).

YouGov’s rankings are based upon YouGov BrandIndex’s Word of Mouth metric, which measures whether a respondent has discussed a brand with friends or family (whether in-person, online, or through social media) in the past two weeks. They are then filtered by positive Buzz - to sift out those who talk well of a brand from those who don’t – and age, so that only 18-34 year-olds’ views are measured.